The bottles of Great Wall, Changyu and Dragon Seal wine line up like sentries on the shelf behind Cristián López. China is the world’s largest market for red wine, which should be enough to put it on the radar of any winemaker.

But as the business seeks to recover from the Chinese government’s crackdown on corruption and lavish gift-giving, consumers are turning away from expensive French labels to “new world” exporters like Chile, the fifth-largest wine-producing nation and second-largest supplier to China.

For Chile, this is more than a sales opportunity: the hope is that the wine business can wean the country off its dependence on bulk exports like copper and agricultural commodities.
Wine appreciation is growing among prosperous Chinese. In Shanghai or Beijing, professionals meet at wine bars. Well-off couples give a bottle as a gift. At holiday times, families propose toasts with red wine instead of the fiery, high-alcohol baijiu favoured by older men.

Ten years ago, Chinese who liked the cachet but not the taste of wine mixed it with Sprite to make it go down better. Supermarkets would plastic-wrap two bottles of wine to a can of Coca-Cola as a sales promotion. A Chinese dairy executive once proudly poured yoghurt into French wine, to demonstrate the versatility of his product.

All that is in the past. Ecommerce is the fastest-growing channel for wine sales in China and specialist clubs are springing up. In 2013, Mr López moved to Shanghai, intending to stay for six months. He ended up living for two years in a country he calls “crazy, like a movie on fast-forward”.

Around the globe, wines from Chile, South Africa, Australia and the US have eroded the market for their French counterparts. Diners in London and New York now choose a bottle based on the type of grape rather than their knowledge of French geography.

China was an exception to this until recently. Confused about which wine to buy, newly rich Chinese would simply buy the most expensive French labels. “People are becoming more sophisticated in terms of thinking which countries the wine is coming from rather than just choosing France,” says James Roy, analyst at the China Market Research Group in Shanghai.
Mr López sees an opening for Chile. He wants to convince the 36m Chinese who purchase at least one bottle a month that wine need not be expensive to be good value.

He has an unlikely ally in the Chinese Communist party, which is in its third year of an unrelenting anti-corruption drive. Wine sales have suffered, particularly French wine, which government importers and state-owned firms bought in lavish, bribery-fuelled binges.

Wine consultant Guy Hooper recalls extravagant dinners even in provincial cities, far from Beijing. “Everyone was very glamorous and we were like the celebrities. There were models on catwalks, signed bottles as gifts, and then a businessman buys 60 or 80 cases.”

Those in the marketing business who thought one such sale meant they had mastered China are having to think again. Many failed to check on basics, such as whether their Chinese agents owned refrigerated warehouses or genuine distribution networks. “Wine spoil destroys brand,” Mr Hooper says.
So do the inflated prices that some in marketing thought would give their labels extra cachet. Ecommerce allows for instant price comparisons. “It has exposed brands that don’t have a solid pricing strategy,” says Mr López. “If pricing is all over the place it affects your brand in every way possible. If you aspire to build a brand, the challenge is different than if you just want to sell wine into China. A lot of discipline is involved.”

Leaving Santiago on the motorway, dusty residential neighbourhoods quickly give way to flat green vineyards and billboards advertising fungicides. This is the Maipo valley, the heart of Chile’s wine country.

In the town of Isla de Maipo, a road crew with a single backhoe has created a traffic jam. Just past the construction lies the De Martino vineyard, where export manager Francisco Venegas displays a framed photograph of a ceremony, 10 years ago, to mark the day a free-trade agreement between China and Chile came into effect.

Following that deal, copper exports quickly turned China into Chile’s largest trading partner. Wine exports also surged, doubling within eight years. But most Chinese who drank Chilean wine were no more aware of where it came from than they were of the origin of the copper in their mobile phones.
That is because most of the Chilean product sold to China is “bulk wine”, a commodity, like copper.

Chile’s sunny, dry days and cool evenings create far more grape juice than the market for Chilean bottled wine can support. The excess is pumped into plastic bladders big enough to fit inside a shipping container and sent to China or Europe.

Winemakers with bulk sales keep them separate from their bottled brands, with good reason. A customer selecting a single bottle from the wooden shelves of a wine shop does not want to think about 24,000 litres of the stuff sloshing across the oceans.

A lot of bulk wine goes to pad out production for other countries’ labels. In China, no laws require the disclosure of the origin of wine inside a bottle. Mixing in better quality Chilean bulk wine has salvaged many a Chinese brand, but marketers are discreet about such details.

Mr Venegas is unusual because he is willing to discuss De Martino’s three product lines: bottled wines, bulk sales and grape juice sales. He is equally proud that Marcelo Retamal, De Martino’s winemaker, was recently named the 13th most influential in the world.

While Viña Concha y Toro is mapping the precise habits of China’s cosmopolitan drinkers, Mr Venegas sees Chinese wine sales from the point of view of his customers, the owners of Chinese labels like the ones whose bottles lined Mr López’s shelf. The picture is not pretty.

“The main concern for some years has been corruption. The industry suffered a lot. China bought huge volumes of bulk wine and very expensive bottled wines — most of that consumption was for corruption, for people related to the government. Big parties, very expensive gifts,” he says. “The whole industry has had to adjust and start again.”

As China’s purge took effect, one niche market that suffered was counterfeit wines. At the peak of the country’s boom, Chinese consumption of French wine outpaced the production of top French châteaux. A clue to that arithmetical impossibility lies in the $500 paid for empty bottles of Château Lafit e in Beijing. Chilean bulk wine may have filled them but no one is willing to say.

‘At least wine in China is now being drunk rather than expensively packaged and handed out as a corporate gift’
Bottled wines account for three-quarters of Chile’s wine sales to China by value, but only one-third by volume. The bulk trade could suffer if Beijing ever adopts labelling rules to make clear where wine comes from.

“In my latest trip I found customers becoming aware there were other importers and their wineries are really cheating,” Mr Venegas says. “They are losing confidence in their own imports. They are noticing that when the Chinese label says it is a French wine, or a local brand, most of it is just blends of the cheap stuff.

“Now they are in a different stage of development. They see themselves as a strong country and empowered. They have the money and they want to buy the good stuff.”
Chinese wine producers led by Cofco, the state-owned food and beverage conglomerate, and privately held Changyu, are responding to Chinese consumers’ desire for authenticity by investing in Chile directly, Mr Venegas says. “The most important thing is that the label says ‘Chile’.”

Bottled wine is Chile’s answer to its century-old dilemma — what to do with too much of a good thing? In the 19th century it was nitrate, used in fertiliser and explosives. Chileans feel the boom created little lasting wealth. In the 20th century mining put the country on the map as the world’s largest copper producer.

Santiago’s solution has been to diversify exports. Fundación Chile incubated a salmon industry, then fruit, and is working on shellfish. The development of bulk wine exports means Chile produces twice as much as it did in the 1980s, even though local wine consumption is only one-third what it was then.

China’s boom presented a mixed blessing for the copper producer. The economy grew at the fastest pace in Latin America but tilted dangerously towards a single product. Chilean wine and seafood sales to China quadrupled after the trade deal but were dwarfed by copper. Chile’s wine exports are worth $2bn per year, fruit $5bn and salmon $3.5bn. Copper takes the main share, at $40bn.

Advances in viniculture add to Chile’s attraction for investors

Vineyards have extended the areas under cultivation by 25 per cent over the past five years. Meanwhile, increasingly sophisticated viticulturalists are discovering new growing areas as the effects of climate change and the positive effects of improved techniques encourage them to investigate further afield.

Taxi drivers in Santiago rattle off copper prices the way Shanghai cabbies point out the price per square metre of each housing block. Copper accounts for 55 per cent of Chile’s exports and almost 15 per cent of government revenues.

Jorge Heine, Chile’s ambassador in Beijing, was bemused when journalists in Santiago started calling him ahead of China’s quarterly announcement on gross domestic product last week.

“This is not the stuff that normally makes headlines in Chile!” he noted. It is now. China’s slowdown has ended the commodities supercycle. The value of the peso has plummeted and an increasingly unpopular government is trimming budgets.
Amid the mining downturn, those involved in wine marketing do not pretend that it can replace copper. They do, however, see their efforts to build a name for Chilean wine as a way to create a brand for the country itself.

This could translate into more tourism, the seeds of a service industry and the beginning of a path away from being an exporter of bulk commodities.
“Wines are Chile’s product. It’s the flag. All those other products, copper, whatever, there’s no designation of origin. Wine is the product that gets in front of the consumer,” says Mr Hooper. 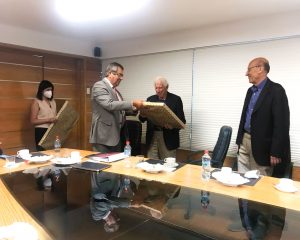